This is a beautiful horn which was found in an attic in Hamilton, Ohio years ago. It demonstrates the artwork of a Lake George School horner, from the French & Indian War period. It is signed “JOHN CALL  HIS HORN ♦ WOODSTOCK MARCH 21 1759”. Above his name is a two line verse, “I POWDER WITH MY BROTHER BALL A HERO LIKE DO CONQUER ALL”. There is a nice deep zigzag border design separating the verse from the name section. There are also numerous faces, symbols, and flowery vines carved on the horn as well as a full drawing of a man carrying a rifle, powder horn and holding a sword. The wood base is secured by wooden pegs and an iron staple is at the base of the horn for the attachment of a carrying strap. It has a nice dark yellow color, recessed neck, and it still retains the horn plug. It is 13.5 inches in length and in excellent condition.

Records show that John Call was born in Oxford, Mass. on April 16, 1739. He moved to  Woodstock Connecticut, Windham County in the 1750’s. He fought in the French and Indian War at the Battle of Quebec in 1759 and according to a record book which he purchased at Albany in the summer of 1762, he carted supplies from Albany to the head of Lake George. The supplies were going to the British garrison at Ticonderoga. John continued making entries into his book until his death in 1808.  John married Lucy Chaffee in Woodstock, Ct., Jan. 1, 1761. John and Lucy moved to Colrain, Mass. in 1765 with three children. The calls had 9 more children while in Colrain.

John was very much involved in the American Revolution. He served with Captain Lawrence Kemp of Shelburne at Fort Ticonderoga from February 23, 1775 to April 10, 1776. This group was part of Col. Leonard’s Regiment whose roll call was sworn to in Suffolk County. John was again back to Fort Ticonderoga from May 10th until its surrender and evacuation on July 10, 1777.

John was also part of the group marching to the Bennington Alarm in Captain Hugh McClellan’s Company of Col. David Field’s Regiment. Lois M. Patrie, author of Patrie’s History of Colrain, says, “On August 16, 1777, when the sound of cannon was heard from Bennington, Colrain’s  Minutemen answered their second “alarm”, making all possible haste to the scene of action  but arriving too late to take part in the engagement.

In the summer of 1777, the British under the command of General Burgoyne began a campaign designed to cut off New England from the rest of this new country. John again enlisted on September 22, 1777 with Captain McClellan’s Company of David Well’s Regiment for  service of one month, two days, with the northern army with roll call sworn to in Hampshire County. Captain McClellan and his men went to Saratoga Springs near the Hudson River in New York where two important battles were fought. The first battle on September 19, three days before John’s enlistment, was indecisive but the second battle on October 7th, has been called the turning point of the American Revolution. On October 17, the British force under Gen. Burgoyne surrendered to General Gates. This battle was referred to as the Battle of Stillwater. John Call was discharged on October 18, 1777.

John’s son,  John Jr., also served in the American Revolution. He served in the Continental Army, enlisting July 7, 1778 and joined the march to Fishkill. He enlisted again June 22, 1780 , and is described as 5 feet, 7 inches in height, light complexion, brown hair, light eyes, age 19, occupation, farmer. He was discharged October 10, 1780 and enlisted again for another three years. 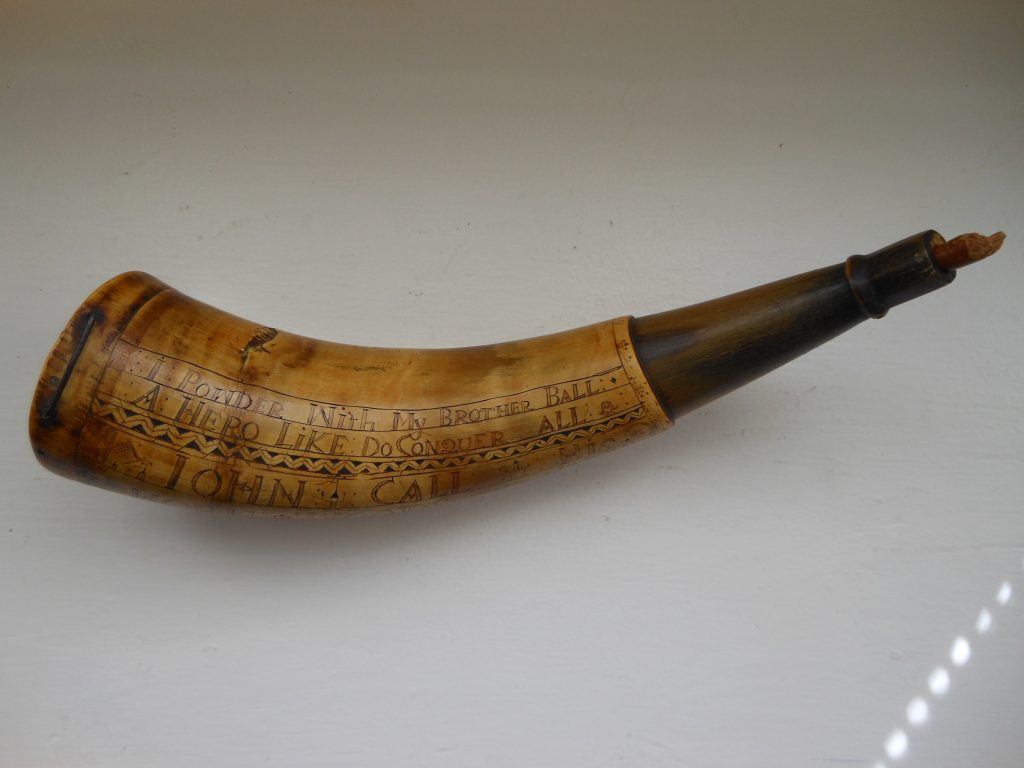 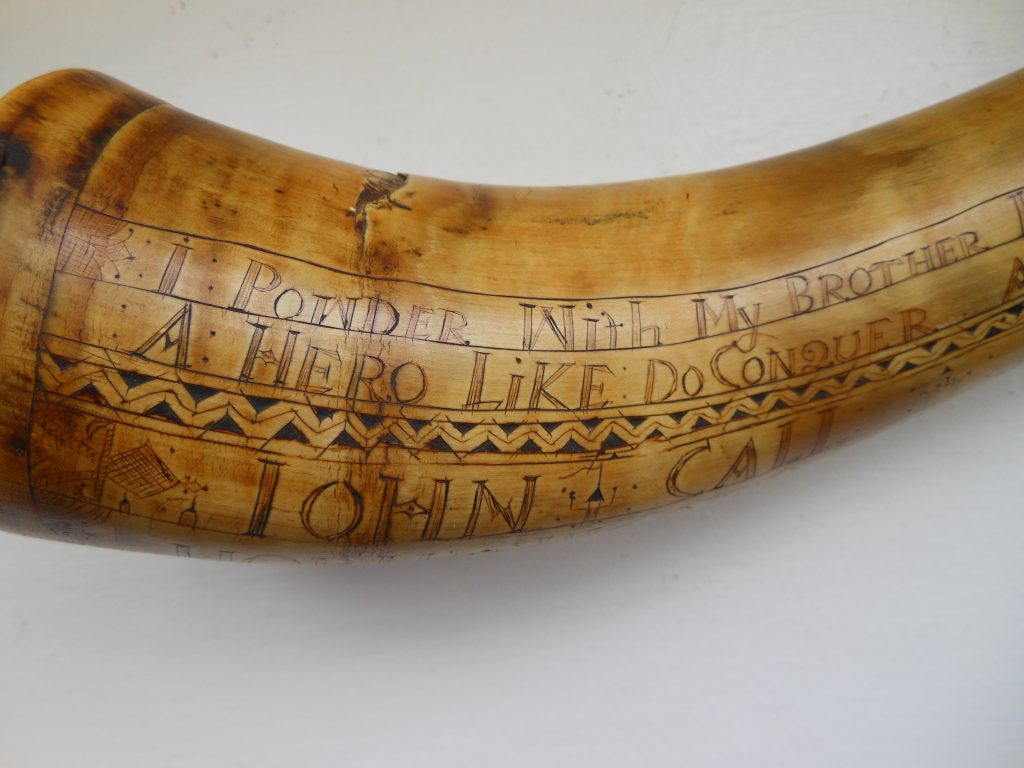 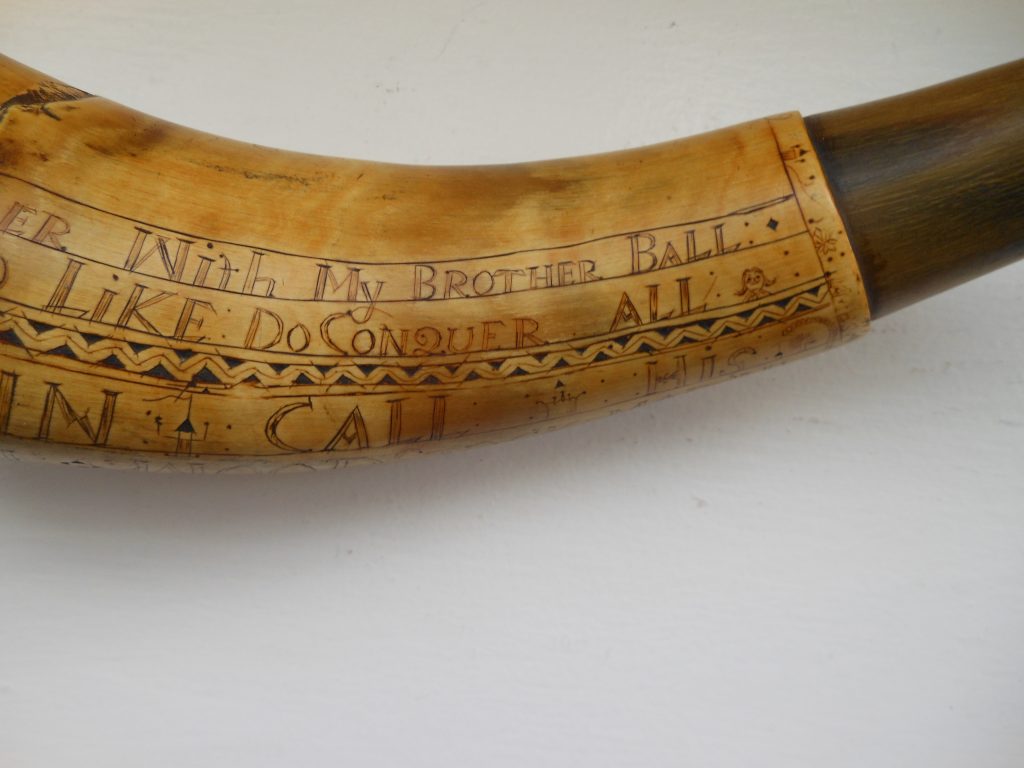 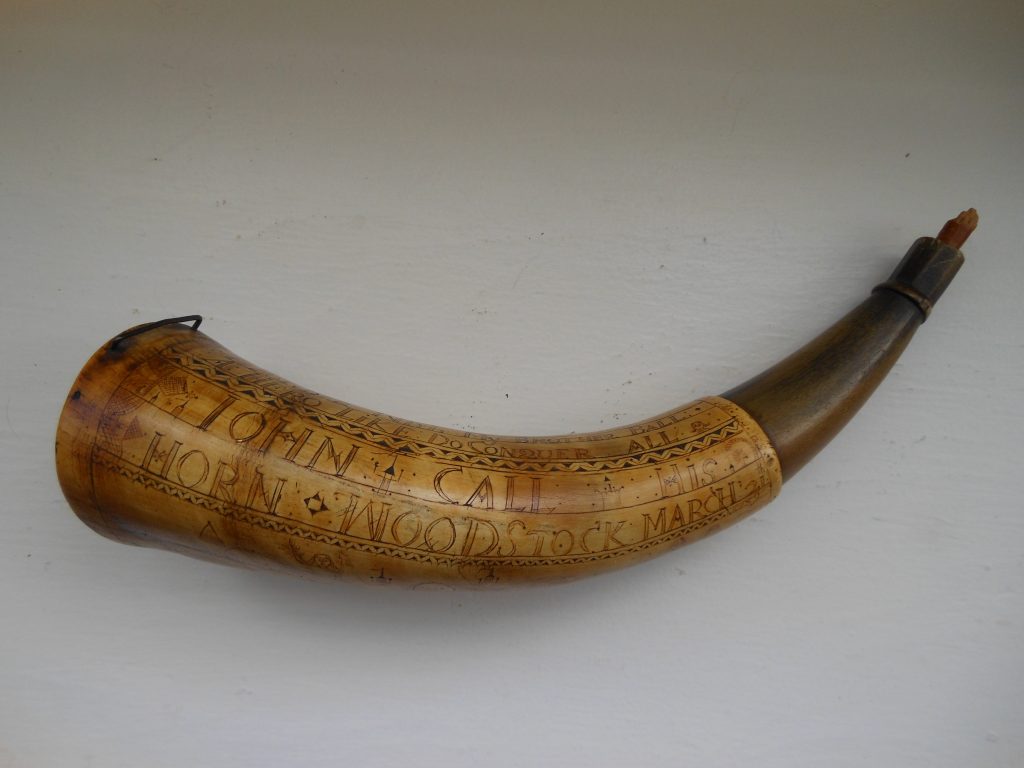 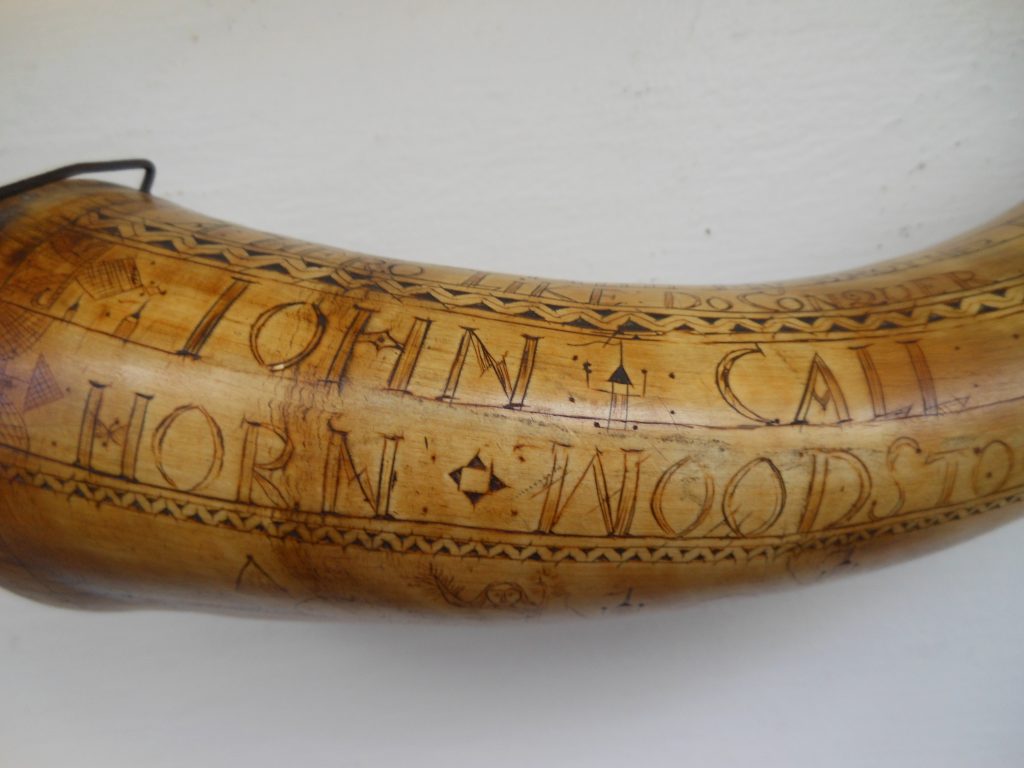 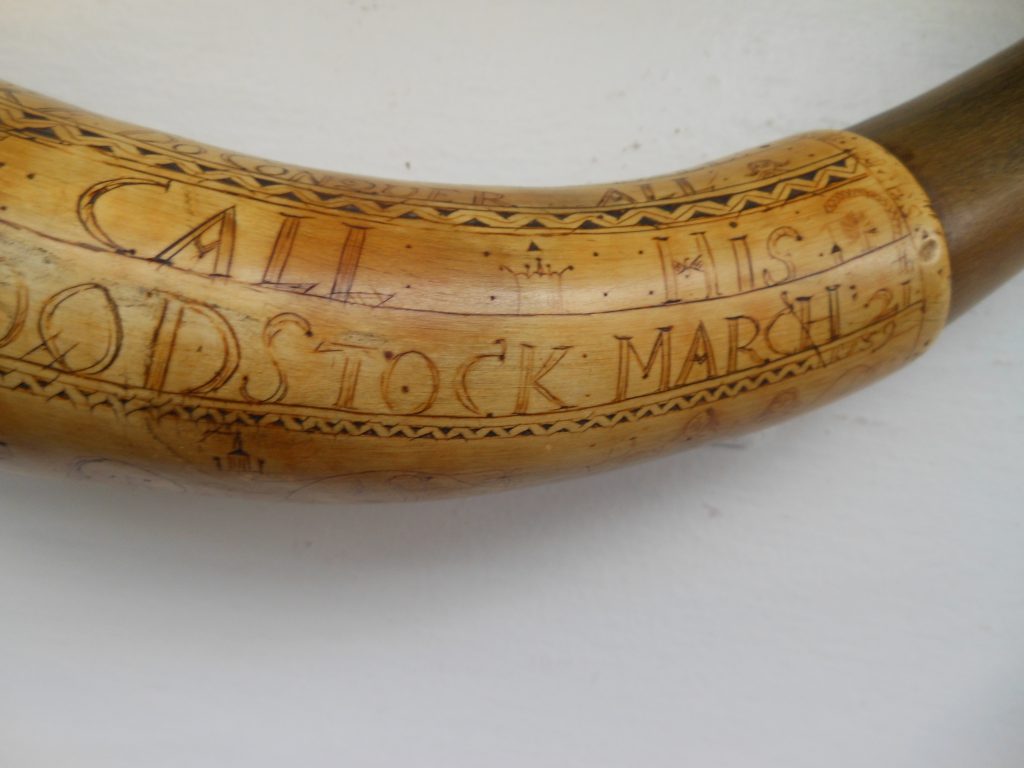 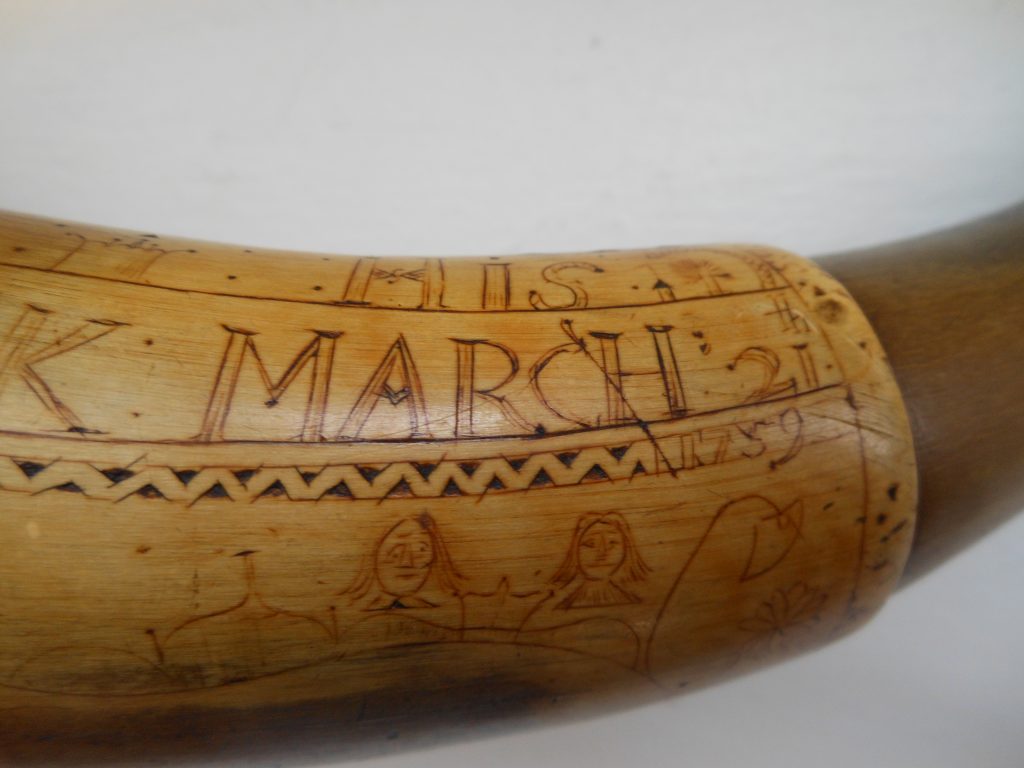 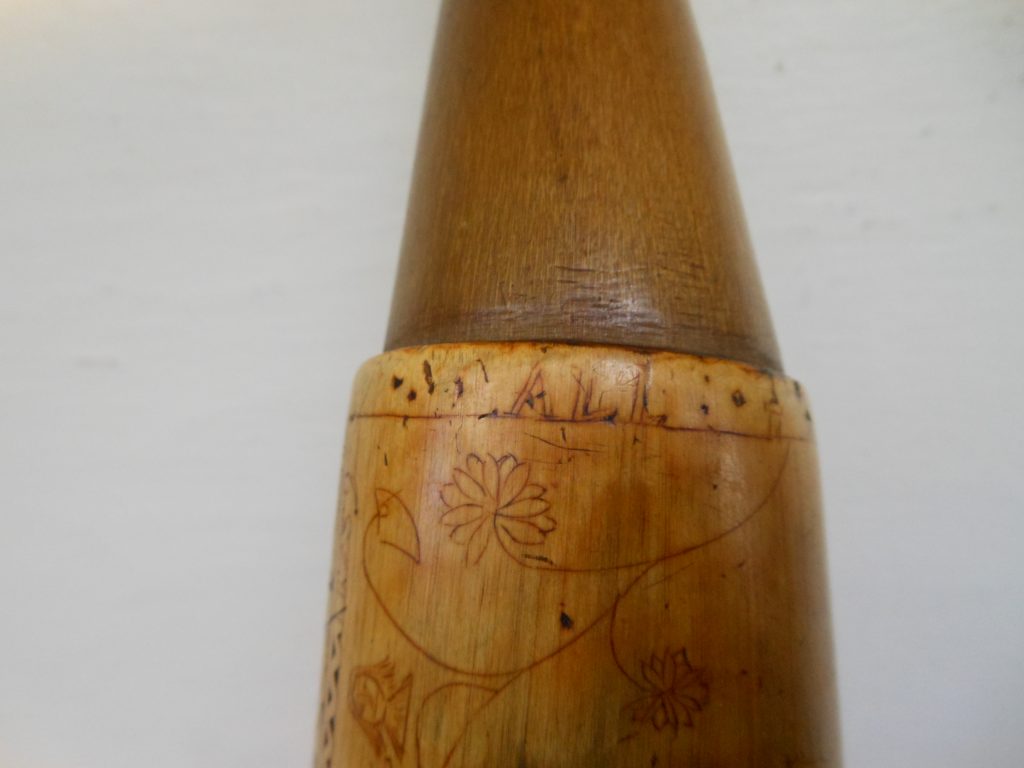 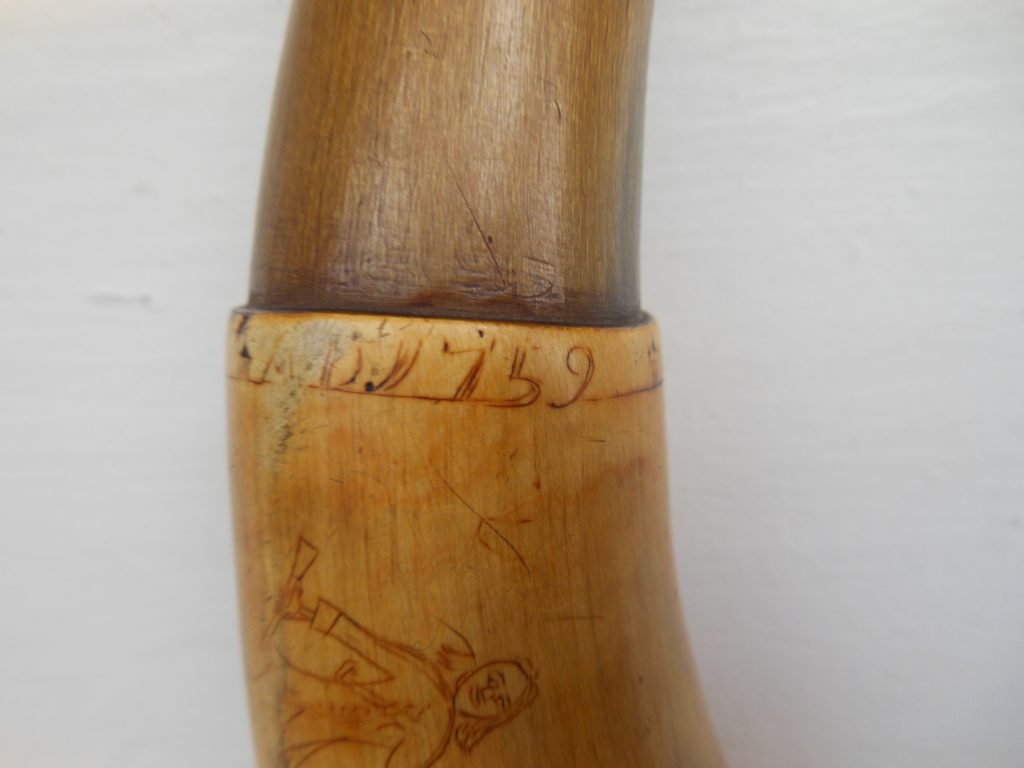 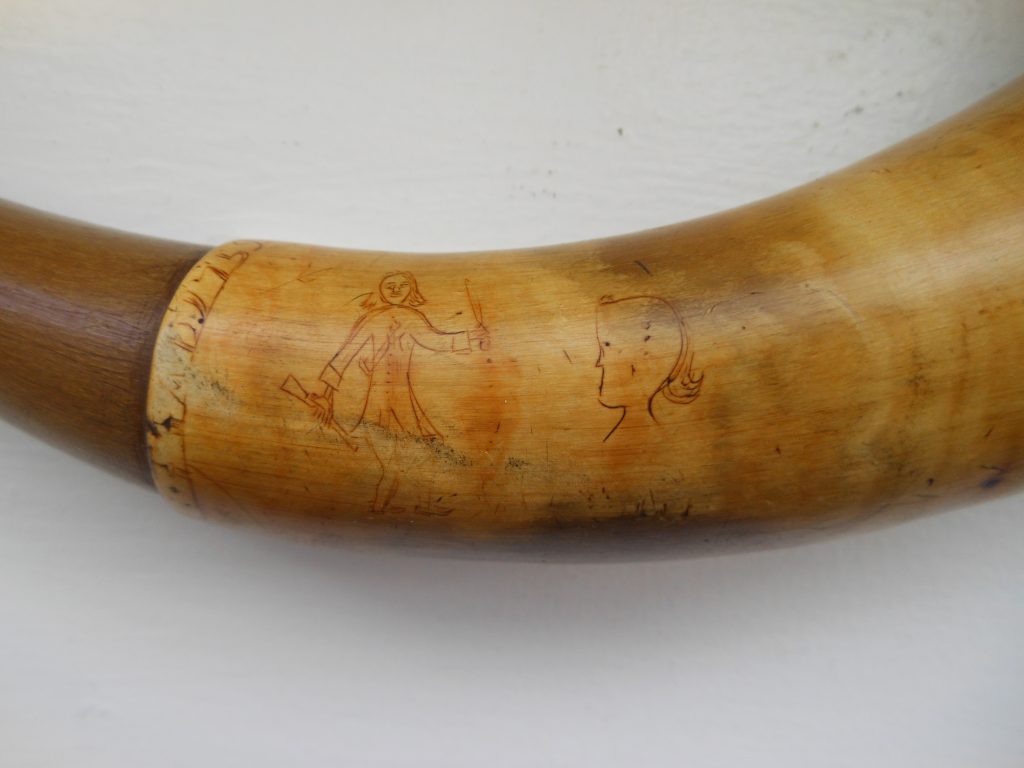 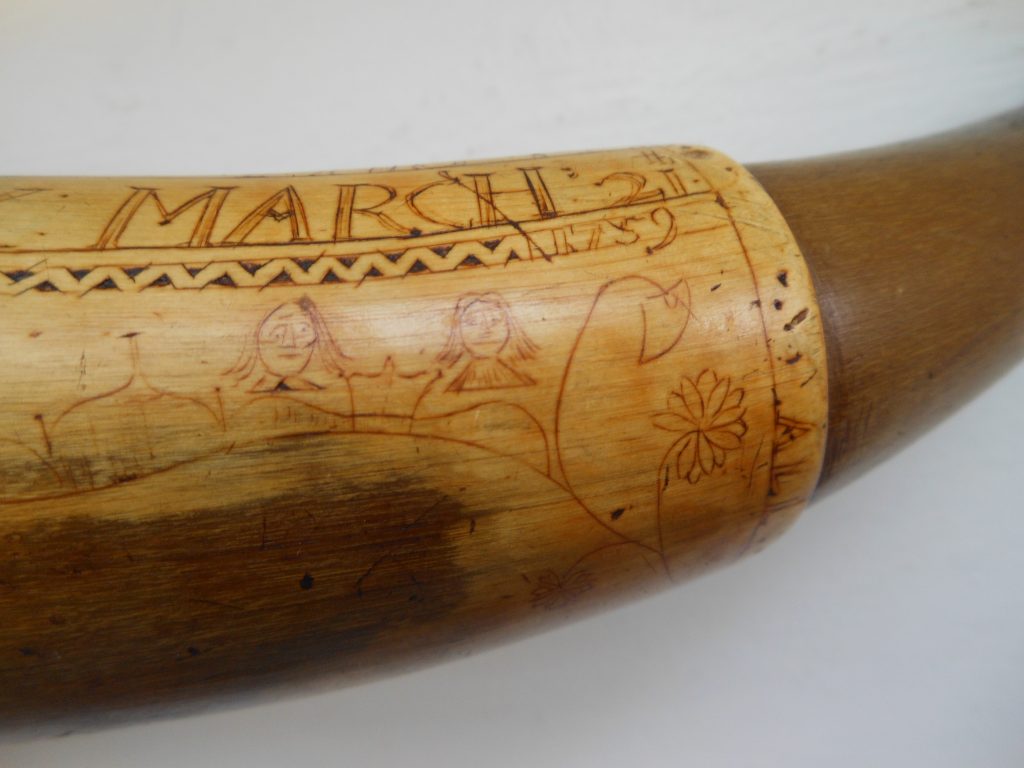 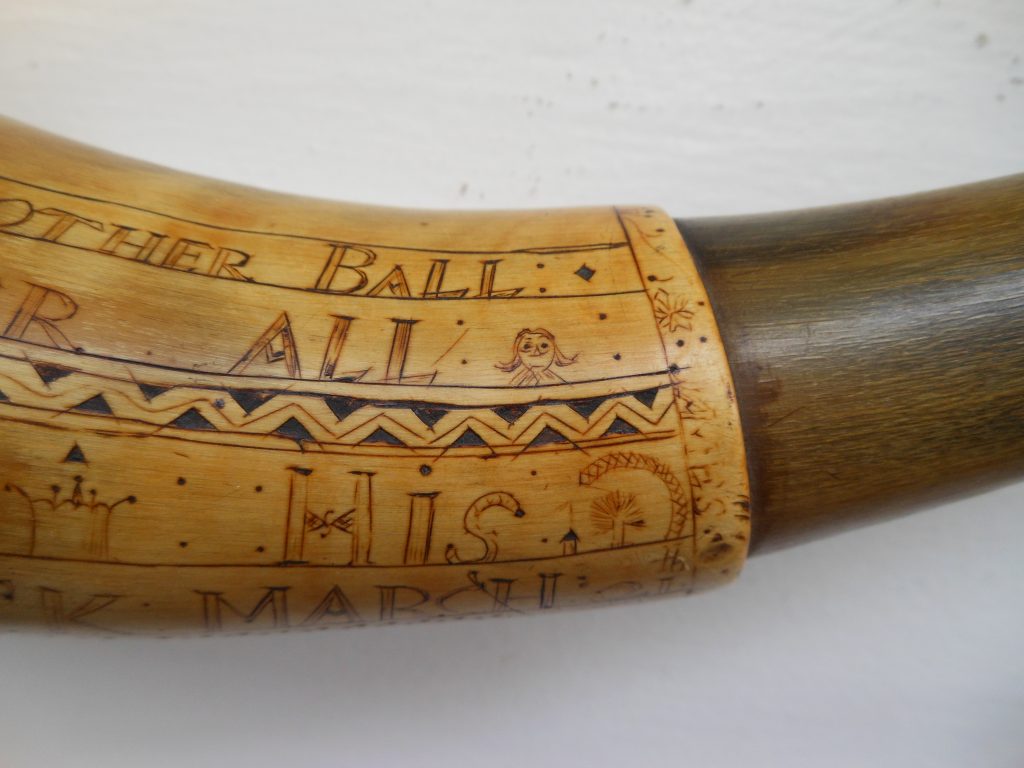 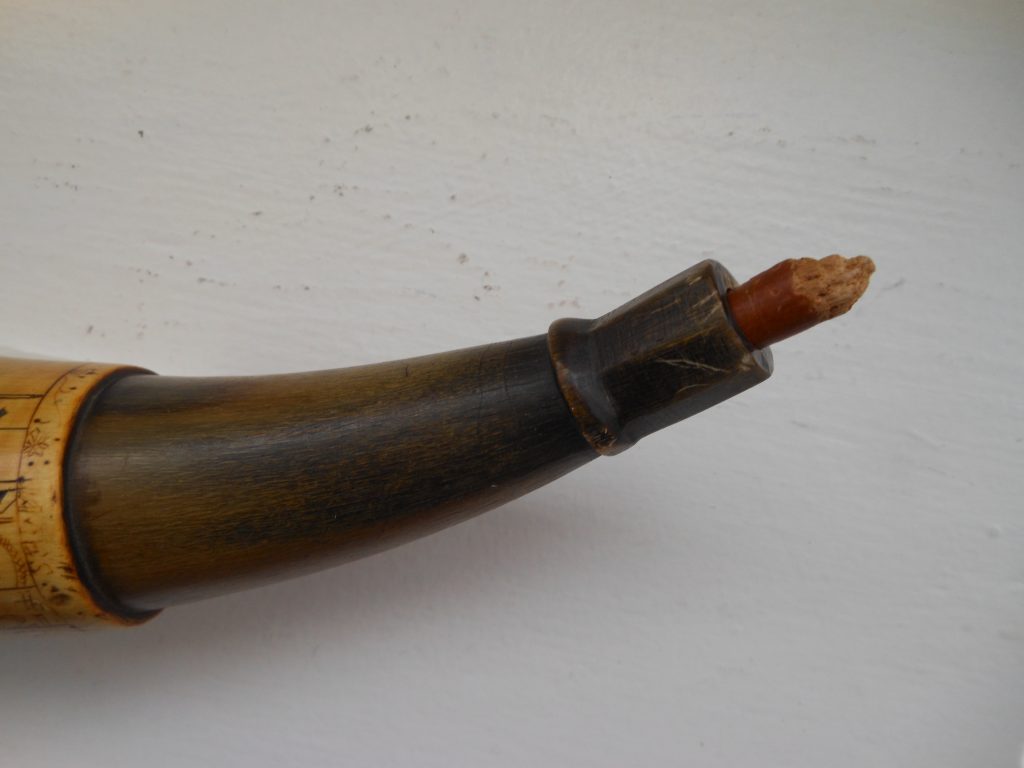 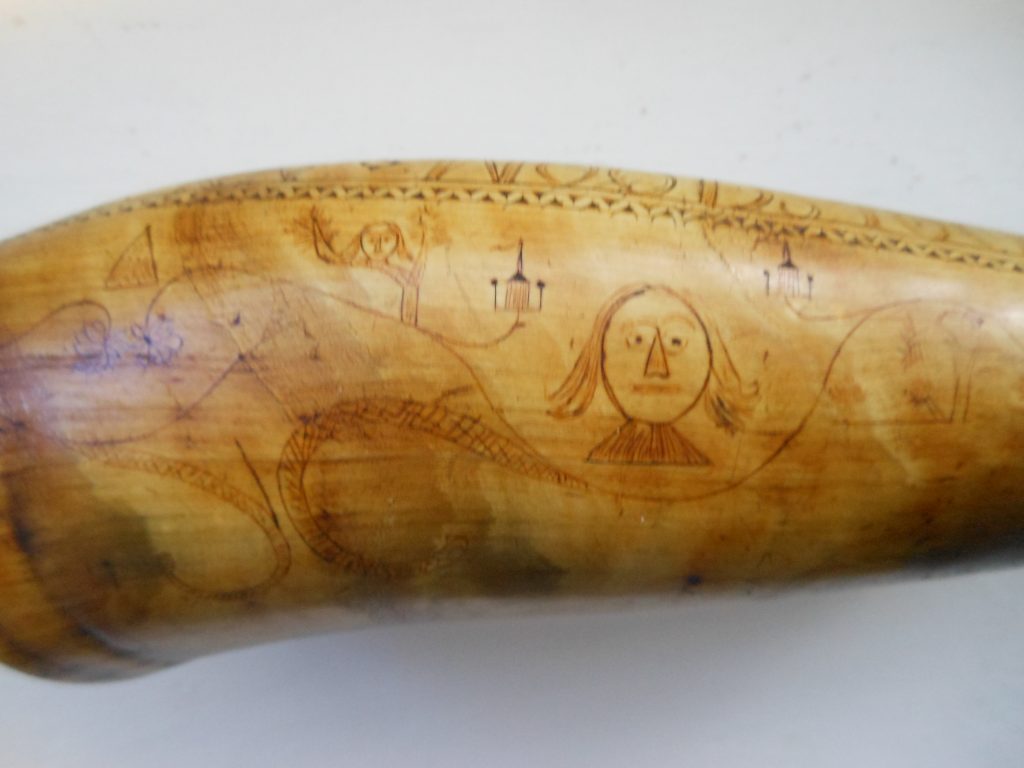 John Call’s Horn from 1759 is a prime example of the carving style popular in the Lake George, NY area of the period.

It has a nice dark yellow color, recessed neck and it still retains the horn plug.

It is 13.5 inches in length and in excellent condition. 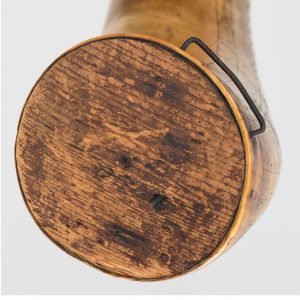