The Fredericksburg Gunnery was established by the Virginia Convention of Delegates in 1775 to produce firearms for the American Revolution. Of the five counselors appointed to oversee the gunnery, Colonel Fielding Lewis and Major Charles Dick took the most active roles. The convention contributed the first 25,000 pounds to implement the gunnery but Colonel Lewis and Major Dick provided most of the operating funds. This establishment remained in production from 1775 until 1781 or later.

On July 17, 1775, the Third Virginia Convention convened in Richmond to create a working government structure. Delegates were elected to serve on the Committee of Safety, which replaced the Committee of Correspondence. Its powers were comparable to the defunct House of Burgess. The most important resolutions that sprung from those meetings were to raise two regiments, a total of sixteen companies of sixty-eight men each to serve one year tours. In addition, sixteen districts of Minutemen were planned.  In all of the county militias, the remaining free white males between the ages of fifteen to fifty were to muster, eleven times a year.

The last meeting of the convention took place on the 26th of August. An ordinance to build a gun manufacturing plant was enacted. One prominent Virginian intellectual described it as, a first step “in open defiance of British parliamentary law.”

The five commissioners appointed to operate the gun factory were Mann Page; William Fitzhugh; Samuel Selden; Charles Dick and Fielding Lewis, George Washington’s brother-in-law, husband to his sister Betty Washington. Lewis was elected chairman of the Committee. As it turned out, the only men who stayed the course was Charles Dick and Fielding Lewis.

Initially, the convention issued to Lewis 2,000 pounds to construct the gun manufacturing plant. Early in November, Lewis purchased a ten-acre tract of land located south of town. He also leased a nearby mill on four town lots.

Knowing how desperate the Continental Army was for arms, Lewis penned a letter, on February 4, 1776, to George Washington in haste. Now the Commander-in-chief of the Continental Army, George received this letter from Fielding describing the developments of the factory and the formation of the army regiments they were establishing. Of note, in August of 1775, Patrick Henry was named Colonel of the 1st Regiment, and the 2ndRegiment was commanded by William Woodford with Alexander Spotswood serving as major. In January of 1777, Hugh Mercer was named Colonel of the 3rd Regiment.

The gunnery was close to the Hunter Iron Works, an important supplier. James Hunter, the owner, added the manufacturing of muskets to his production output, independent of government funding.  He also supplied regiments with axes, spades, shovels and mattocks.

The items produced at the Fredericksburg Gunnery were muskets, bayonets, flint locks, ramrods and more. The plant encompassed a main manufactory, a stone powder magazine, cartridge works, repair shops and a vegetable garden, for the benefit of the employees.

Charles Dick ran the day to day operations, hiring a master workman and artisans. Although, the very capable Mr. Dick never discussed his origins or even his birth date; the self-made man wasn’t a member of the established gentry. However, he easily found his place amongst Fredericksburg’s leading citizens. Dick was a successful merchant, land owner, Mason and a well-respected member of the community. He served on several important civic organizations; the Committee of Correspondence and later the Committee of Safety.  A business partner and personal friend of Fielding Lewis, Dick was godfather to Lewis’ first son.

On September 22, 1775 an advertisement for locksmiths was published, most likely in the Virginia Gazette. Dick needed gunsmiths, artisans and a variety of other laborers to make the gunnery productive. It was evident, early on, that there was a deficiency of expert gunsmiths ready for hire. The House of Delegates passed an apprentice act so Dick could train a class of artisans from the white youth in the area. The young men would be housed, fed and clothed; all paid for by the government. Dick forbade the drinking of beer and rum at the establishment, a drastic change from Eighteenth Century practices. Three black men were engaged to cook, bake and do an assortment of odd jobs. Whether they were slave or free is unknown.

In an emergency the aristocrats of the town, women, too, worked at the factory stuffing cartridges, etc., for the more than one hundred guns hastily readied for the Fredericksburg and Spotsylvania militia. The most commonly used weapon at the time was the British Brown Bess, a muzzle-loading smoothbore musket. It fired a single shot ball or a cluster shot which fired multiple projectiles like a shotgun. About four shots per minute was the typical output from most soldiers. The factory produced similar muskets to the British Brown Bess by the rate of twenty per week.

Below is a fine example of a Fredericksburg musket produced in 1776. The tail of the lock plate is marked; FREDG 1776. The wrist plate is engraved; U S  2nd Reg Va Vols Lt Wm Collins. Lieutenant William Collins is listed on page 193, section 257 – Caroline County, in a book titled; Virginia Militia in the Revolutionary War: McAllister”s Data. It lists him as a Lieutenant sworn in on June 12, 1779. There are numerous pay vouchers and roster listings of William throughout the years of the Revolutionary War.

The musket is 59 inches in length overall and the barrel measures 42 inches, the original flint lock measures 6 & 7/8 inches in length. All of the brass hardware is in the style of the British short land Brown Bess. The piece still has both sling swivels and is in excellent condition . 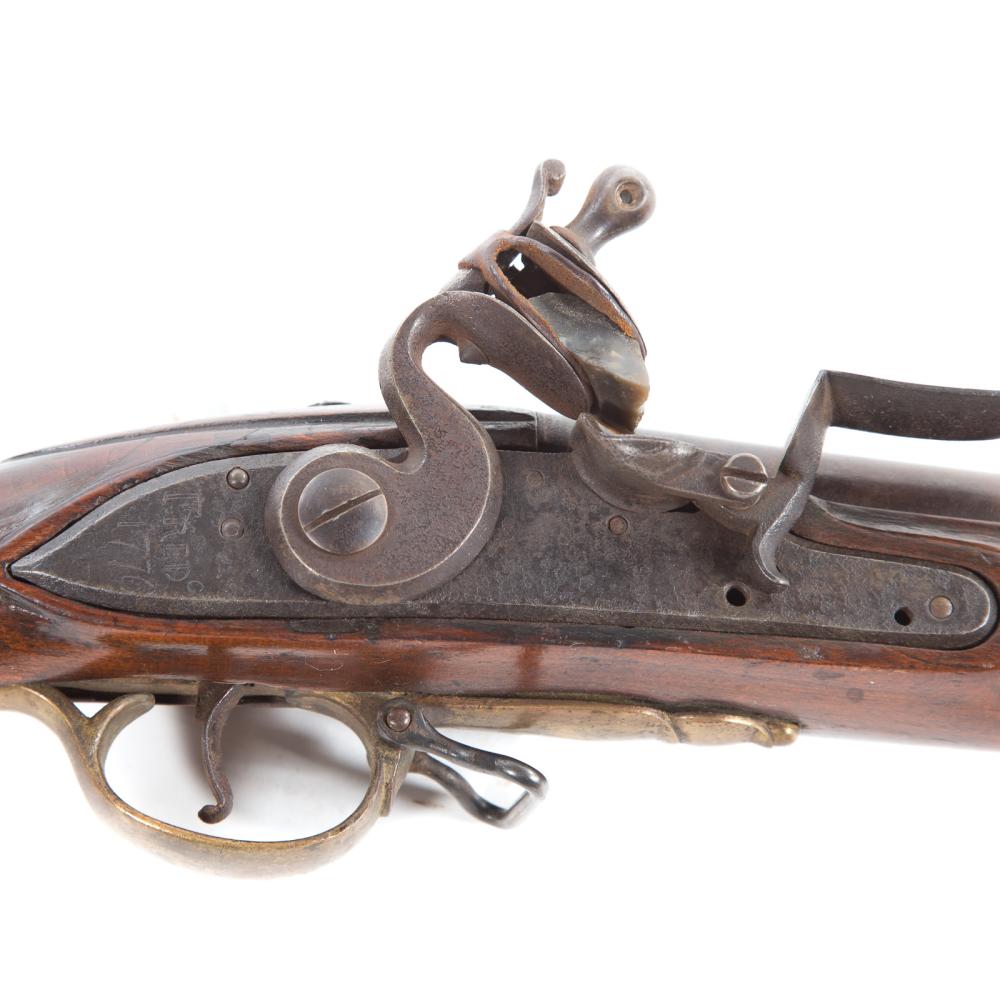 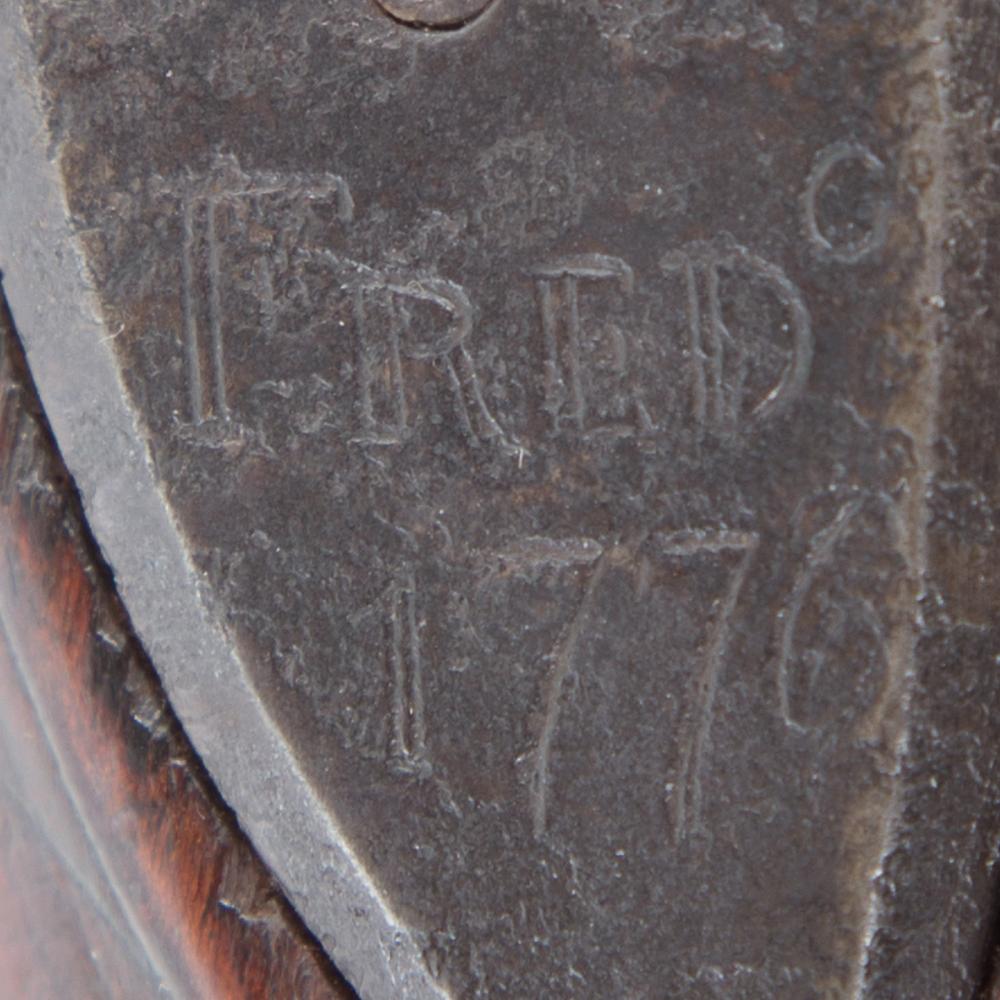 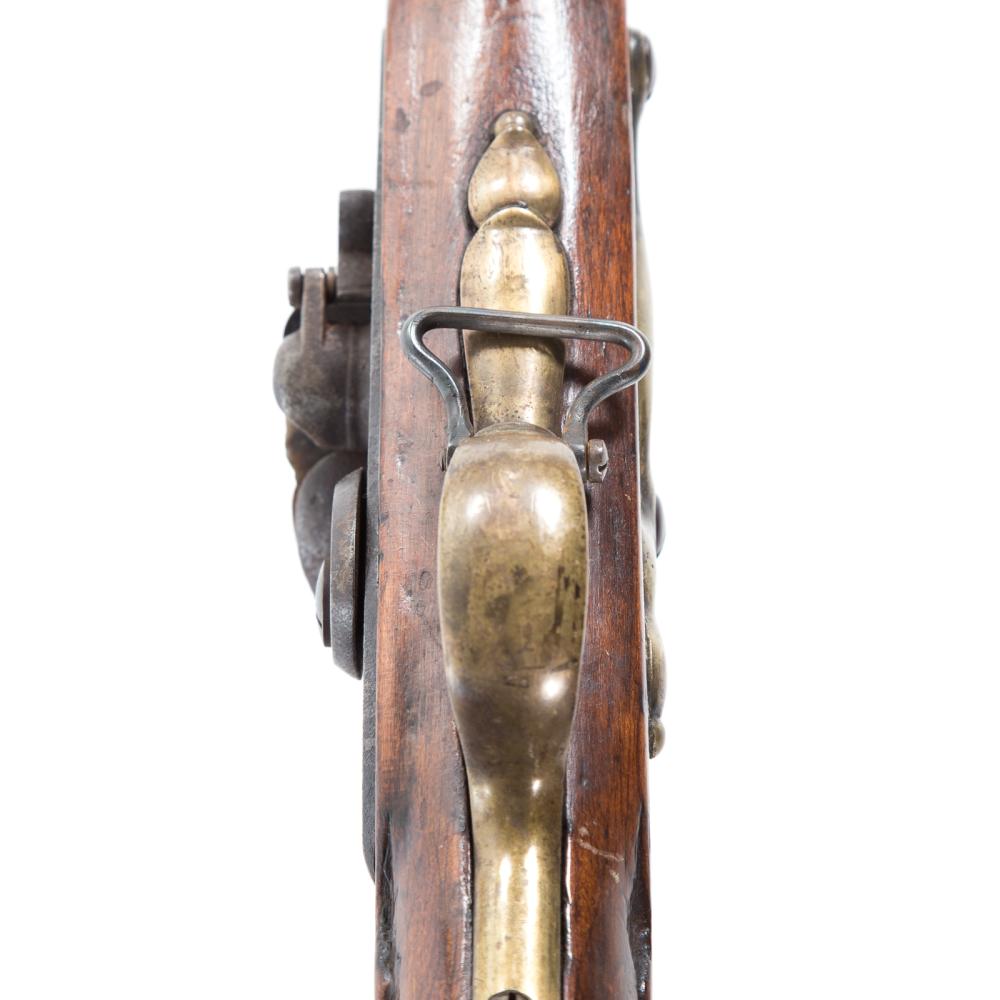 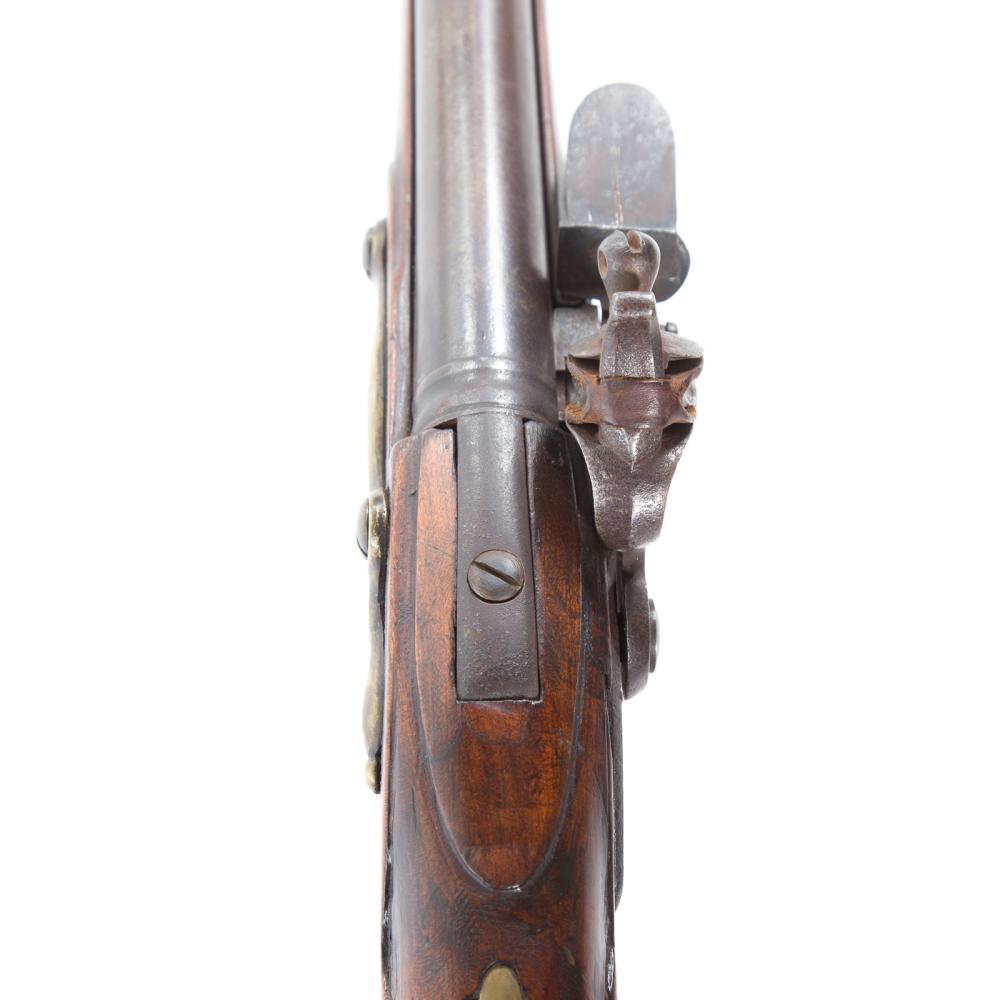 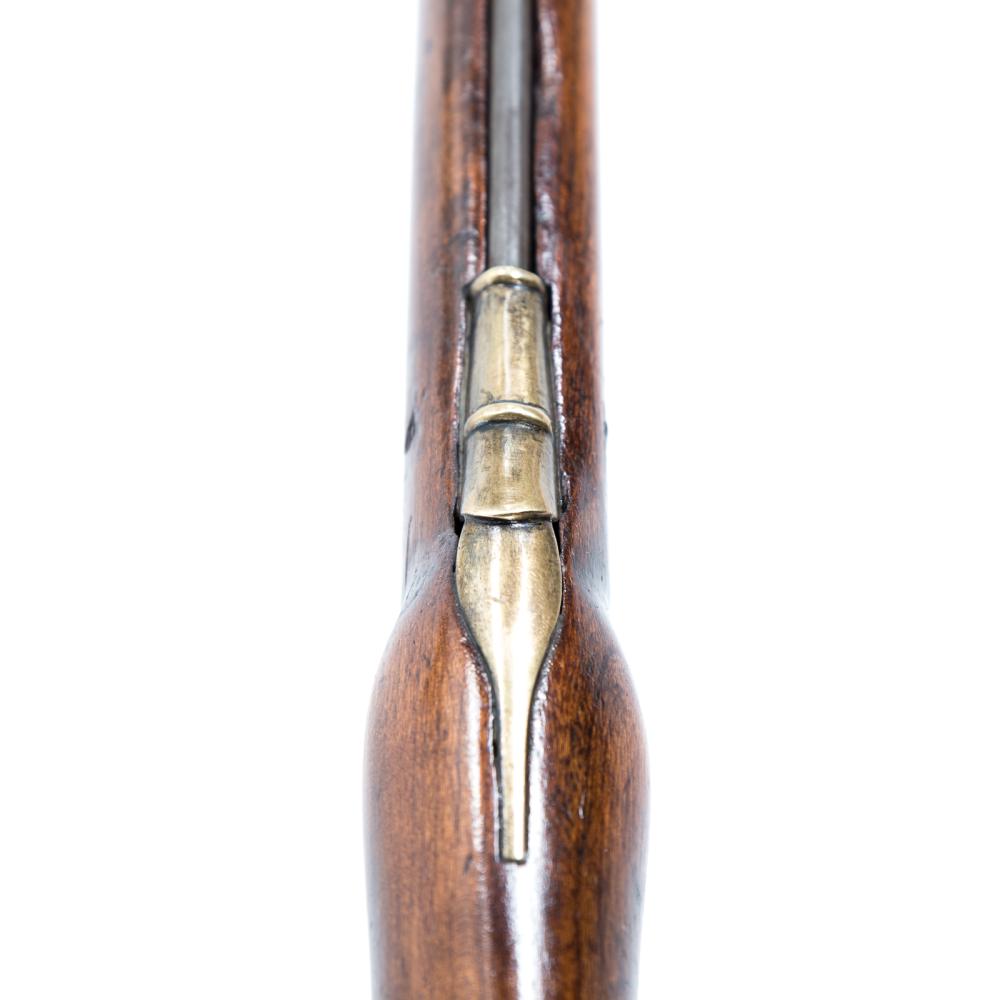 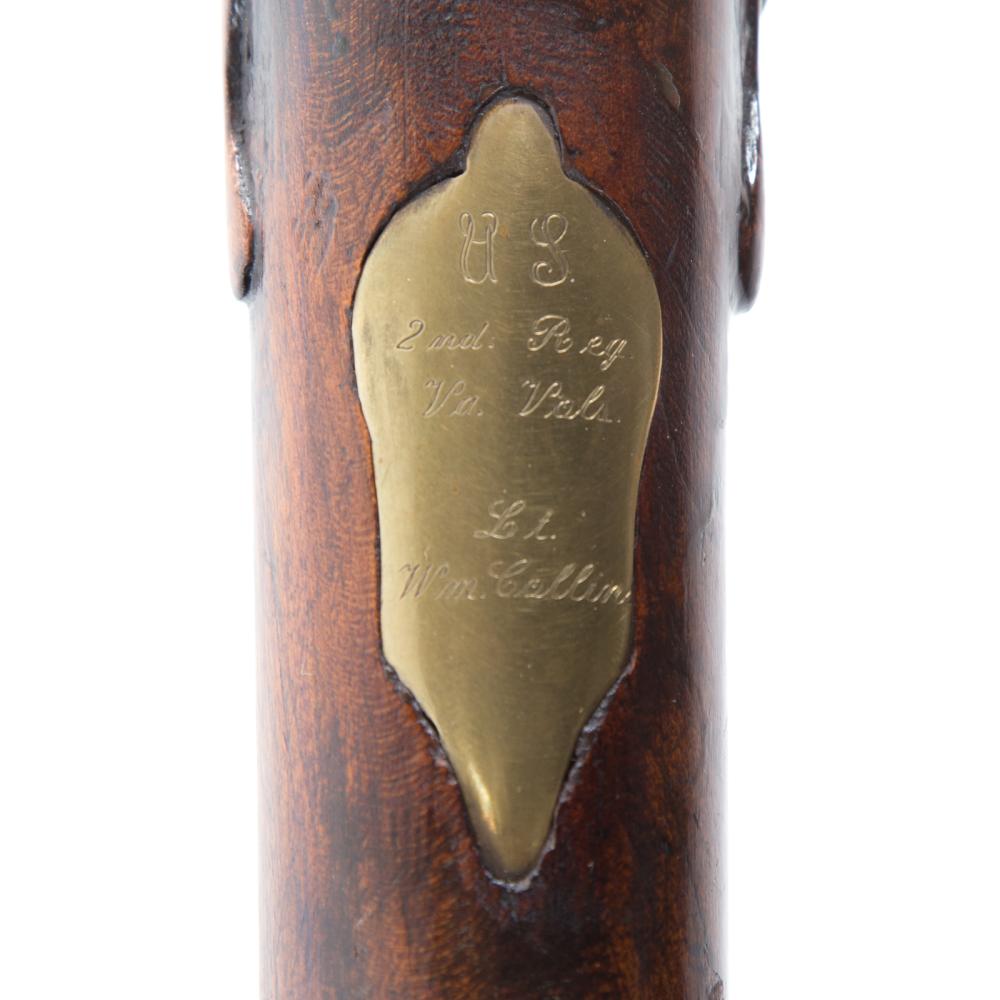 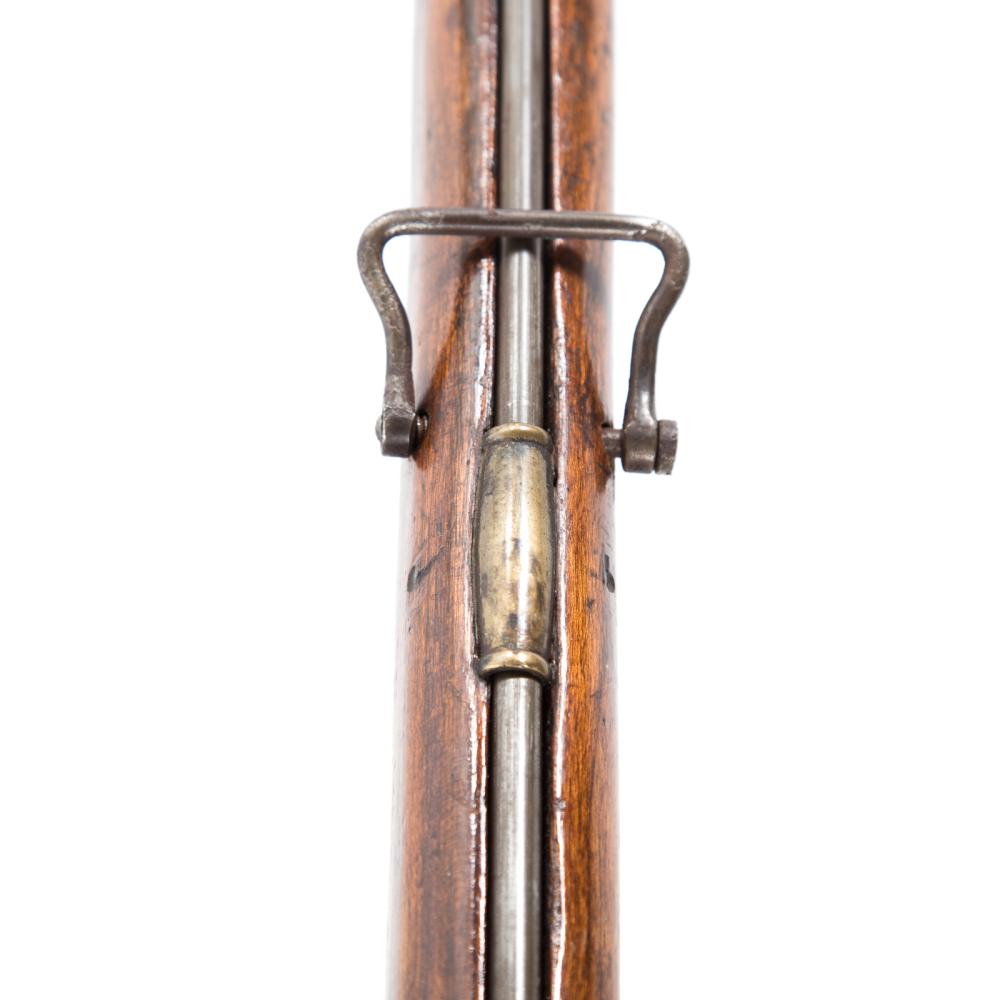 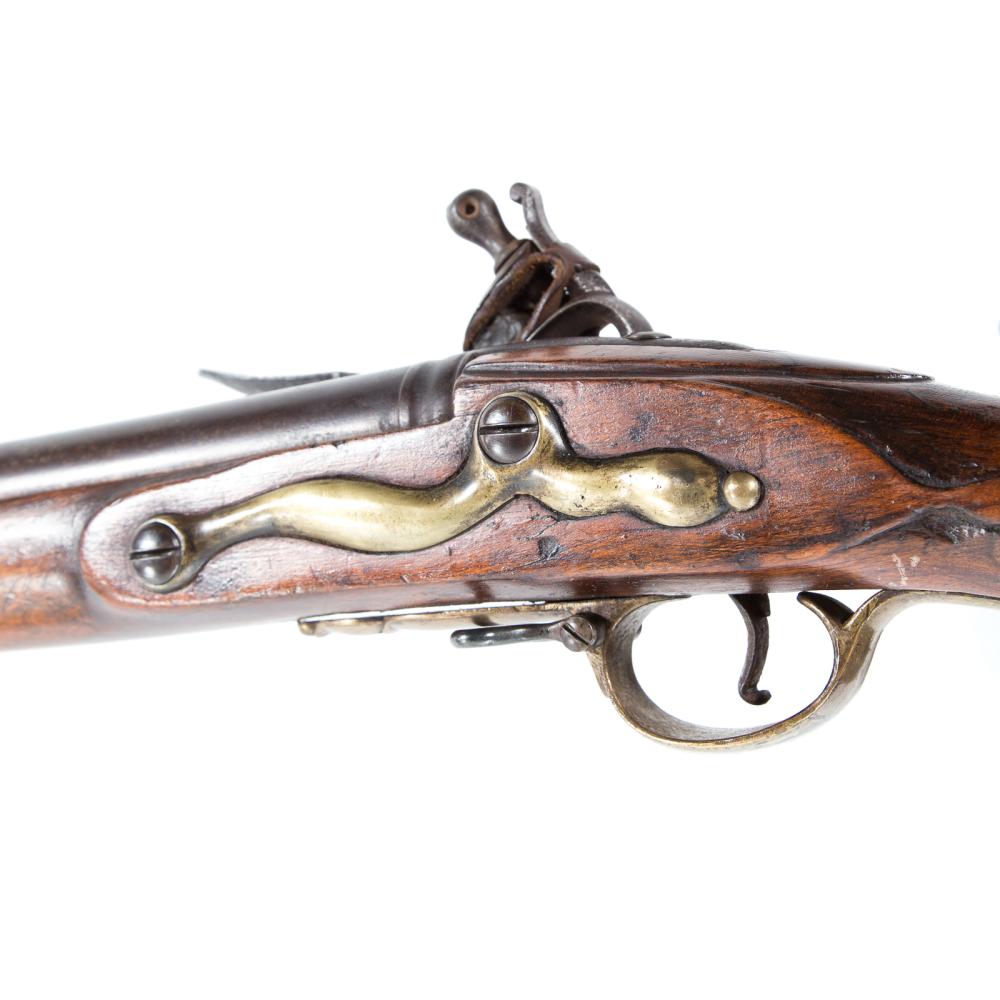