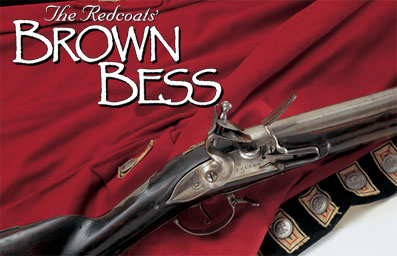 While researching the Brown Bess musket, I came across a great site and article by George Neumann entitled “The Redcoat’s Brown Bess” on American Rifleman.

Mr. Neumann does an excellent job of detailing the history of this legendary  weapon, with descriptions of each pattern  for the gun along with their dates of use. A great timeline is given to plot out the evolution of the Brown Bess, with pictures depicting each model.

The Brown Bess’s Role in the American Revolution:

As with any country suddenly involved in a war, the American Colonies in 1775 had to acquire a great number of arms quickly. Their immediate supply was already in the militia system of each state that required men from 16 to 60 years of age to own a longarm plus a bladed secondary arm such as a sword, bayonet or belt axe. Those and other flintlocks they pressed into service included a broad mixture of various locally made hunting and military designs using assorted old and new parts, commercial arms contracted from private makers, inventories of provincial arsenals, confiscated Loyalist arms, state purchases of spare guns from civilians, surplus supplies from European dealers and muskets issued here by the British during prior wars. These latter arms were largely obsolete and repaired arms, and in many cases were vintage Dutch, Liege and other European cast-offs. Thus, the few Brown Besses initially in American hands were usually worn versions of the early Long Land 1730 and 1742 designs, which were later supplemented by at least 17,000 more recent patterns captured during the conflict (Moller, Ref. 5).

via The Redcoat’s Brown Bess.

An excerpt on George C. Neumann from the PBS documentary, “Liberty! The American Revolution”:

George C. Neumann has authored several books on the subject of revolutionary weaponry. A businessman but equally a historian by avocation, he is a past commander of the Brigade of the American Revolution, fellow of the Company of Military Historians and a writer whose articles have appeared in every major publication devoted to arms and history. His collection of revolutionary weaponry, one of the most extensive in existence, is now in the hands of the Valley Forge Museum.

This entry was posted in Articles, Flintlock Muskets. Bookmark the permalink.

1 Response to The Redcoat’s Brown Bess